When a member of the public was out enjoying her garden recently, she was surprised to see a skinny young cat run confidently up to her and start crying for food.

From the condition of two-and-a-half year old Albert’s coat and his obvious hunger and weight loss, together with his friendliness and lack of fear around humans, we suspect that he was a domestic pet who’d accidentally got trapped in a garage or shed somewhere and had only just managed to escape.

Sadly, this is a common problem amongst outdoor cats and unless they are freed or set themselves free, they can easily end up suffering from starvation, dehydration and a whole host of other health problems.

Poor Albert was experiencing diarrhea when we found him, and had also caught mild cat flu which could have turned fatal had he not been able to receive care and attention. Luckily for him, the member of the public called us after giving him some food and our Animal Welfare Officers went out to collect him straight away. 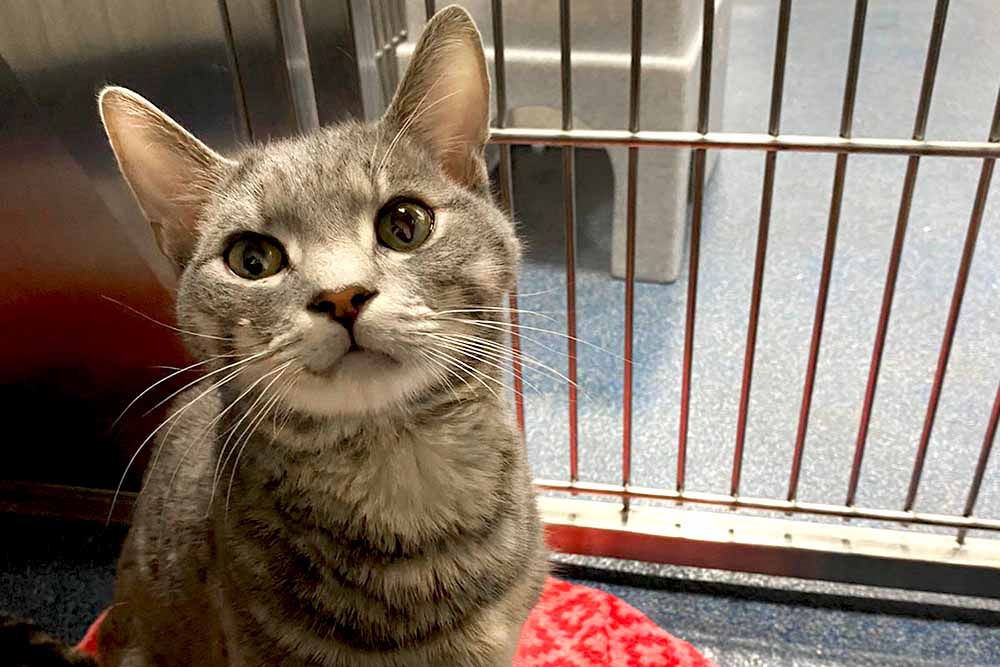 Thankfully, we managed to trap Albert easily and bring him back to our vet clinic for a quick health check before settling him down in a warm and cosy cabin with some more food and water. We also checked for a microchip, but sadly Albert didn’t have one, and although we were sure he was a lost domestic pet, we were unable to track down an owner in the area where he was found.

We therefore later admitted him to our Cattery as a rescue and conducted a more thorough intake examination after he’d adjusted to his new environment. Our Vets discovered that Albert would need dental treatment to remove a broken tooth, but our initial priority was helping him to regain the weight he’d lost and recover from his diarrhea and cat flu.

We were pleased to see that over the next couple of weeks Albert steadily put on the pounds, and soon looked much healthier and happier. As he was making such excellent progress and was expected to make a full recovery with no lasting detrimental effects, we scheduled him in for dental surgery and placed him with a dedicated foster carer to continue his rehabilitation whilst he waited for his appointment. 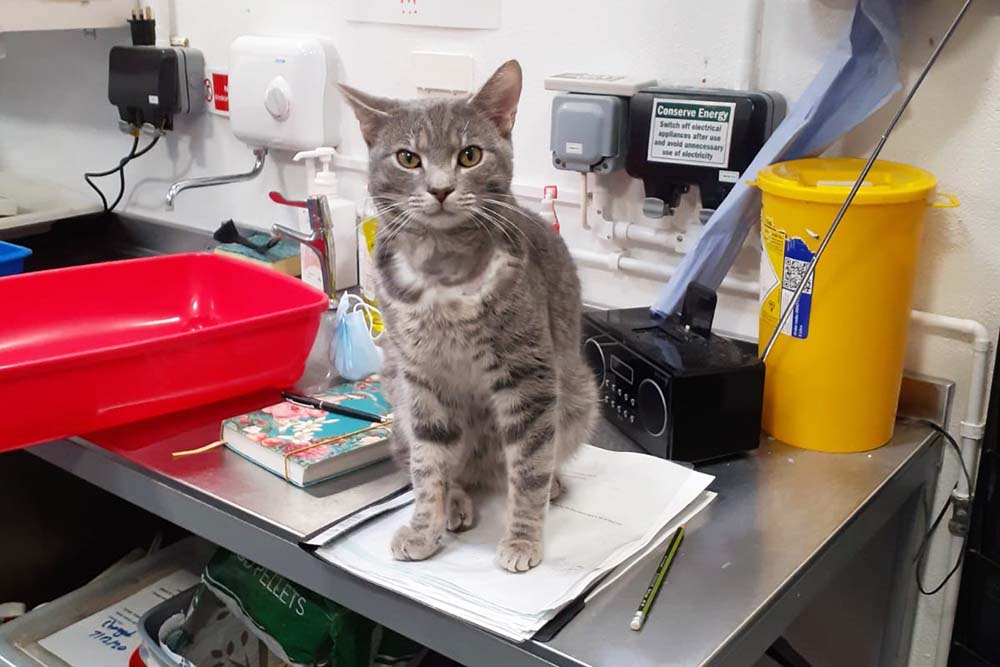 The foster carer noticed a few days later that Albert began to be reluctant to put much weight on his left leg, and so brought him back to our Clinic for an X-Ray. We were relieved to see the results come back completely clear, ruling out broken or fractured bones; and given the lack of swelling or visual abnormalities we diagnosed a soft tissue injury and cleared out a ground floor cabin for him to stay in whilst he healed.

As with his earlier ailments, Albert’s recovery was quick and smooth with the help of pain relief and anti-inflammatories, and he was soon back at his foster carers jumping around and playing with his toys and her curtains without a care in the world.

He remained happy and settled there until we called him back for his tooth extraction, which also went exactly to plan. His appetite never faltered throughout and afterwards he was able to eat without pain or distress, quickly bouncing back in the manner we’d come to expect from this cheeky chap!

Given how playful and friendly Albert was, we were entirely unsurprised when he was adopted shortly after going up on our website. His new owner says he’s settled in very well and is just as active and affectionate as ever, and we are thrilled to see him enjoying life to the full!

Are you ready to adopt a cat like Albert? Meet the cats in our care who are looking for their very own forever homes today.