The last thing a couple out on a morning walk expected to find was an abandoned cat in the entrance to their local park, but when Otto and her husband came across a young feline trapped inside a litter box they immediately fell in love with the two year old tabby.

The couple freed the cat, later named Queen after the area she was discovered in, and noticed that she was covered in urine and faeces with large amounts of both also filling the litter tray itself. Little Queen was also freezing cold, leading Otto to believe that she’d been alone in the park all night before they stumbled across her.

Although Queen was understandably timid and scared after her ordeal, she allowed her finders to free her from the litter tray and take her back to their home a couple of minutes walk away.

Whilst her husband helped to clean the urine and faeces from Queen’s fur, Otto rang us to ask for advice and we immediately agreed to go out and assess the situation. 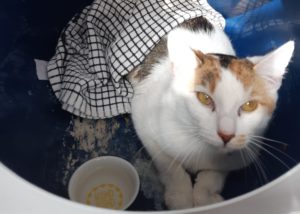 When our Animal Welfare Officer Jake Holliday arrived at the house, Queen was already looking much happier and had been given some food and water to tide her over until we got there.

Jake said that she was very sweet and easy to handle, and it was clear that Otto and her husband already cared for her very much. They mentioned that they’d actually been considering adopting a cat, and that it felt like a blessing for them to find Queen that morning. They expressed their interest in welcoming her into their family permanently, and so in the meantime we took Queen back to our vets so that they could do a thorough health check.

Thankfully, Queen was in good health and her night outside didn’t appear to have had any lasting effects or concerns.

Whilst we completed a home check to make sure Otto and her husband’s home environment matched Queen’s needs, we neutered Queen and admitted her to our Cattery where our team also fell in love with her. She was quite shy at first but soon found her courage, and it quickly became apparent she was a confident and cheeky cat who enjoyed lots of attention once she got used to you!

After a couple of weeks, we were delighted to be able to reunite Queen with Otto and her husband, who had passed all the necessary checks and were over the moon about being able to give Queen her well-deserved forever family.

Otto said “It’s almost fate – we had been talking about getting a pet cat and then she just turned up almost on our doorstep! She’s settled in really well and we both adore her.”

We are absolutely thrilled about Queen’s good fortune, and we’d love to find a forever home for all of the animals in our care and ensure they all enjoy a happy ending.

If you are ready to give a cat like Queen the forever home they deserve, meet our cats who are waiting for their new families.